If you’ve ever planned a fishing trip around freshwater fish spawning times, you may already know that the bite can be consistent and incredibly exciting. The reason for this boost in activity is because fish, such as the largemouth bass, tend to feed heavily as […]

Learn Info You Need to Answer “When Do Trout spawn?”

Trout are tremendously popular sport fish. There several species but rainbow, brown, and brook trout seem to get most of the attention. When trout fishing, it is important to be able to know answers to fish life history questions, such as “when do trout spawn.

Rainbow trout spawning season is in the spring. However steelhead, which are anadromous rainbow trout, seasonally move in and out of streams. They will enter lake or ocean tributaries in fall and remain in the stream most of winter before spawning in the spring and heading back to the lake usually by April. Brown trout spawning season is in the fall or early winter. So too, is the brook trout, which actually isn’t even a trout, but a type of char.

Hatcheries and the Spawning Seasons

Although there are distinct spawning seasons for each trout species, hatcheries have been able to extend fishing opportunities in some areas. By artificially reproducing trout from parents collected from various geographical locations, fish hatcheries have found that the timing of trout spawning varies with these slightly different genetic strains. Also, to fully answer when do trout spawn we need to take into account influences by water temperature, day length, and even water flow. Trout need cool, clean, silt-free, gravelly areas.

If you are Wading

If you are wading during or near trout spawning season, try to stay on the shore and even leave the stream completely if you notice spawning activity such as a fish turning on a side and kicking up gravel with tail, or find spawning nests, called redds, which are evident by large patches of cleaned gravel. The goal of any fishery should be to not be totally dependent on stocking so try not to disturb any areas of natural reproduction.

Knowing the answer to “when do trout spawn,” is important for fishing as well as the conservation aspects. You may find that trout feed heavier before spawning. In larger creeks and streams that support staggered spawning by several species, fly anglers can benefit by casting patterns that mimic trout (or salmon) eggs at various stages of development.  Plus, regulations may prevent fishing completely during that trout spawning season window so read up when you renew your fishing license.

The Bassmaster Classic is happening now

“Are you here for the fishing thing?” the fellow at the hotel desk asked. “Yes, but how do you know?”  (I wasn’t wearing my “Just Keep Reeling” hat or signing in with my lure shaped pen to give it away.) “Everyone is here for it. […]

This is why Conservation Volunteers are important

How to Make a Fishing Leader for Fly Fishing 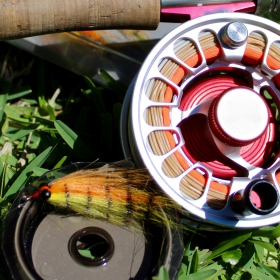 You might be wondering what the 50-25-25 formula means. Don’t worry though; it’s not a complex mathematical equation. 50-25-25 simply refers to the percentages of leader material with regard to line strength.

Whether you’re tying a fishing leader for your fly rod or learning how to make fishing rigs to use with your spincast gear, you’ll have the process down in no time with just a little practice. Just as with building different types of fishing rigs, there are different ways to build fly leaders. However, the best fishing leader you can use for fly fishing is the one you know how to make with confidence.

Use these Potomac River Fishing Tips to catch more fish

At over 350 miles long, there are plenty of opportunities for Potomac River fishing. This historic river was once highly polluted but it has made great strides toward recovery. There are many great Potomac River fishing spots as this large river flows by Maryland, Washington […]

Andy Whitcomb 3/12/2018 Several aspects regarding boat safety requirements occur long before the trailer even is hooked up. Monitoring the weather forecast will help ensure that you and your passengers don’t have to risk battling high winds, rain, or lightning that may occur from sudden […]

One of the best ways to learn boating basics is to start with a small boat.  A flat-bottom jon boat or aluminum skiff around 12 feet in length is perfect for fishing, exploring shallow waters and learning how to run and maintain a boat.  The best small outboard motors don’t necessarily pertain to a brand as much as they do components.  Here are some points to consider when choosing small outboard boat motors.

In August 1973, the U.S. Coast Guard required a capacity plate for boat motors.  The purpose of the plate was to match a safe weight and horsepower with your boat.  If your boat is old, then the plate may not be in place.  Best small fishing boat motors don’t need to be heavy or pack a lot of power.  Balance is more important than speed, and lighter motors don’t drive the bow up and allow water to come over the transom.  Small outboard boat motors can be about half as heavy and powerful as specified by the manufacturer.

The best small outboard motors are simple to install and use, but there are two features that are helpful.  As small boats are light a strong wind or current can push ’em around.  In those situations, electric starts are helpful.  Recoil starts are better for stronger boaters who can pull the cord without tipping over the boat.  Power tilts are also a nice option as they allow a new boater to trim up the outboard without taking focus off navigating.

Fuel economy and environmental friendliness are the hallmarks of four stroke engines.  It’s why folks consider them among the best outboard engines.  Two strokes are enough to power small boats and they’re easy to work on.  Learning to work on small boat motors pays big dividends; you’ll learn how the work and will be able to fix minor repairs that arise when you’re on the water.

This season, get started with small boat and outboard.  Soon enough you’ll have the confidence and skills you need to make every day on the water great. Check our boat explorer tool to learn more about each type of small fishing boat motors and get ready hit the water!

Finding the best jon boat for fishing isn’t hard. Jon boats are one of the most versatile types of fishing boats you can buy. These types of boats are easy to trailer to different waterways and are simple to fish from. In fact, if you […]