Boating Basics: Several Steps on How to Moor a Boat

Tom Keer 12/21/2017 One of the most important and easiest skills for boating basics to learn is how to moor a boat. Here are three tips on how to moor a boat to a dock, a buoy or the bottom. How to dock a boat: Necessary […]

Which Catch and Release Net to Use for Fish Conservation 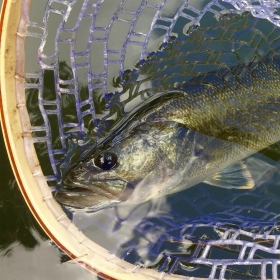 In the past, you may not have given much thought to the type of catch and release net you’ve used. However, the net you take along on your fishing trips actually plays a key role in the survival of any fish you release back into the wild. The best catch and release net will give you the ability to land, photograph, and release fish without causing any harm to your beloved quarry.

Remember that the more you handle a fish, and the longer you keep it out of the water, the less likely it is that the fish will remain alive and healthy once released. When considering which type of catch and release net to use, take into account the following fish conservation tips.

Since you know how rubberized landing nets can contribute to higher fish survival rates when catch and release fishing, why not learn a few more catch and release best practices? Applying fish conservation methods like these can help ensure that our nation’s fisheries stay healthy and offer plenty of angling opportunities for future generations.

Galveston Pier Fishing Tips to Help You Change Things Up

There are many great Texas fishing spots for both fresh and saltwater. When deciding where to fish for saltwater species, keep in mind that access to deeper water can be an issue, especially if you don’t happen to have a boat or are just there […]

Winter fishing tips always include the reminder to fish slowly. And the best way to catch catfish is to fish slow anyway so winter catfishing can require some serious patience. But with the frigid water temperatures, unless you own a neoprene wet suit, at least […]

We boaters don’t know the word quit, so we always try to squeeze in a few last minute boating holidays.  There are several different options from which to choose.

Where to boat if you haven’t winterized yet? Check out the boat parades offered in many communities.  Folks in Old Town Alexandria and Washington, DC turn out in droves for the Alexandria Holiday Boat Parade of Lights.  Dozens of boats are decorated in festive lights and cruise the Potomac River.  Tempe, Arizona’s Festival of Lights is one western equivalent, with boats buzzing the shoreline of Tempe Town Lake.  Many of the best boating lakes and waterways have similar festivals, so check and see if there is one nearby.

Some folks combine travel and boating, and this time of year there are some boating holiday deals to be had.  Of course you can head to England and cruise one of the canals and save money.  One service is called hireboat.com and stops in small towns and villages while cruising through the English countryside.  Bangers and mash and a pint of Guinness never tasted so good.

3. When is the best time to go boating?

Not now for me, the ice will soon be on the lakes.  I’ve been thinking about combining a vacation with boating by heading to the Tropics.  A few ideas for my cheap boating holidays came by looking at boats for rent in the Virgin Islands.  The costs are a bit expensive, but if I can split the fares with my family or friends they’re more than reasonable.

Deals on last minute boating holidays appear every day.  Maybe the best way to ring out 2017 and to ring in 2018 is on a boat.  The truth is a local, foreign or Tropical trip all sound good to me.

Debbie Hanson 12/12/2017 Finding Christmas fishing gifts that everybody wants and needs doesn’t have to be a challenge. In fact, it’s actually super easy to track down angling-related items that almost every single fisherperson can use.  You better not pout, you better not cry… this […]

Temperatures are consistently dropping in the Northern tier, so it’s time to think about getting together your ice fishing setup.   If you’re like me your ice fishing gear has gathered dust since last season. 1.  Ice Fishing Essentials Clean and relubricate flags and reels […]

Austin, the capital of Texas, lies in the Hill Country region of Texas. Austin bass fishing, as well as Texas fishing in general can be phenomenal due to the long, warm season and impoundments creating quality water resources.

The Colorado River is impounded within the city of Austin, forming the slow river-like Lake Austin and Lady Bird Lake. The shoreline is mostly privately owned, leaving little shoreline access besides a few public parks where one can find a couple of boat ramps maintained by the Parks and Rec Department of Austin.  Recreational boating can be heavy during the day, especially during the summer so non-peak usage times such as evenings and cooler months may be the best time to try your luck. Fishing also can be influenced by water release from the dam of another close Colorado River impoundment, the more “lake-like,” vast Lake Travis.

Walter E. Long Lake is much smaller and located just east of Austin. It is noted for great bass fishing too. The water here is used to cool a power plant so it will remain warm in winter if the plant is running. The hybrid striped bass here and in Lake Travis are a bonus for fishing in Austin with anglers having success with jigging spoons or topwater lures. Other Austin bass fishing opportunities include Lake Georgetown, Granger Lake, and Lake Kyle.

Bring standard bass fishing tackle but that medium action rod and reel combo with 8-10 pound line just may get put to the test. The chance of a true lunker is so high that the state has a ShareLunker program where genetics of these giants are passed along to new generations at the Texas Freshwater Fisheries Center near Athens, Texas.

Soft-plastics worm rigs are tough to beat throughout the summer. With cooler temperatures, spinnerbaits or swimbaits and lipless crankbaits may get that reaction bite.  When bass fishing Austin, you should go smaller and think more finesse presentations for smaller rivers and streams such as at McKinney Falls State Park.

Although Austin bass fishing usually employs normal bass techniques, you may want to keep an open mind as far as bass fishing tips. Austin also is known for a bridge that spans Lady Bird Lake that happens to house over a million bats. Bass are opportunistic and will eat just about anything that will fit in that oversized mouth. In fact, a bat lure was introduced this year at ICAST. Perhaps, on my next trip to Texas, after I get my fishing license, I may just have to try one of these unique topwater lures below that bridge.

November is a transitional time of year.  Anglers in the northern tier are pulling out tip ups, ice augurs, and other winter fishing gear.  Momma always said pick up after ourselves, and that means it’s time to properly store our fly, conventional and bait gear. […]