Tom Keer 9/29/2011 A few years ago I was hauling my boat home from a fishing trip.  Up ahead there had been an unfortunate accident.  No one was injured, but one of the three cars involved was totaled.  It seemed that most of the glass […]

Do You Practice Fishing?

Debbie Hanson 9/28/2011 Would you walk up to the first tee at a golf course without having been to the driving range first? Would a baseball player step into the batter’s box without having had a least a little batting practice? Of course not. So […]

Most anglers cannot just step out of a lakeshore house and start casting; a road trip is required before we wet a line.  And road trips call for some sustenance… often at some unholy hour. Every major road leaving Stillwater, Oklahoma has a gas station convenience store, fully equipped to cater to the angler.

Some foods are an integral part of a fishing trip, consumed not necessarily for nutritional value but more out of the fishing trip ritual. For example, I am inclined to agree with singer Robert Earl Keen and grab some coffee and a honeybun before pursuing my 5-pound bass. Nathan Kennedy, fly-fishing blogger at Tennessee Valley Angler shared his “Top Ten Fishing Snacks,” which includes Vienna sausages, the “ultimate disgusting fishing snack.”

Anything consumed before the outing needs to be inhaled quickly, preferably in the vehicle.  It should not cut into fishing time. Angler John Harris depends on his bottle of Pepsi and mixed nuts to get him two hours up the road on early morning drives to Lake Erie for steelhead, yellow perch, or smelt. If professional tournament angler Laura Starkey Heflin eats before getting on the road, she prefers the sugar buzz of Twizzlers and Fruit Loops.  Sometimes snacking helps one continue to shake off an early morning stupor, but for me, visions of giant, leaping, hungry fish usually are sufficient to help me reach my target heart rate for the day.  Whatever is consumed, keep in mind that if they are really biting, it might have to hold you until sunset.  Or until the Mrs. calls.

One might feel peckish during a trip as well. Bassmaster Elite Pro Casey Ashley always has a grape Gatorade and a Snickers on the boat, while Alton Jones is a sucker for Pringles, regular flavor.  John Crews consumes protein bars but Boyd Duckett is a peanut butter and jelly man.  (Chunky, grape, on a hamburger bun.) It was reported that during one tournament, Gerald Swindle lamented that he had eaten all of his Moon Pies during a 3-hour fog delay, and would have to rough it without them while on the water.

After a day on the water, we are usually not in suitable attire to dine at a restaurant so just hit the first gas station convenience store. My son Luke cannot look at mashed potatoes without getting the dry heaves but considers the rotating gas station hotdog to be haute cuisine.  Dad goes old school in a Fear Factor sort of way and dumps salted peanuts directly into his bottle of RC cola.  I prefer fountain Dr. Pepper, rather than a bottle.  For the complete soda experience, something in a back room needs to go “pshtpshtpsht.”  In addition, there needs to be four sizes of straws to choose from: coffee swizzle stick straws, regular-sized straws, poke-you-in-the-eye extra long straws, and the ones with the little spoon on the end, in case the kids want an “Extreme Strawberry” seat-upholstery-staining icy thing.

I generally choose something not too heavy to eat.  Even if not the driver, I do not want to get sleepy back in the warm truck.  Riding “shotgun” is an important job too, stirring the conversational pot to keep the driver awake and watching for suicidal deer.

Today was one of those unfortunate days when I did not have time to fish…  Still, running errands, I swung by the corner gas station and grabbed a honey bun and coffee.  I was thinking about fishing.  And that seemed a good enough excuse.

Tom Keer 9/22/2011 The Northeastern Native Americans named full moons. The various tribes tracked the moons according to what was happening in that specific month. Some of them have to do with fishing. March is known as the Worm Moon. As the ground thawed the […]

Andy Whitcomb 9/20/2011 To the untrained eye, this piece of wood simply looks like a decorative landscape accent. However, anglers may recognize this stump actually as a tribute to a grand, formidable foe – the snag. Once a submerged productive fish structure, it was covered […]

Western Drift Boats in the Fall

There is a lot of great fishing to be had in the fall, but if I had to pick one of my favorites it would be drifting a big, Western river.

Cold nighttime temperatures and warm daytime temperatures mean you sleep like a baby only to wake up ready to fish hard.  Water temperatures are usually in the 55-65 degree range, which means that a trout metabolizes a stomach-full of food per day.  And that means that the trout are hungry and they’ll even eat a less-than-perfect presentation.

A drift boat transports fishermen through some of the prettiest areas.  Aspen turn bright yellow, oaks add a brownish/red, and any uncut hay or wheat field is a golden brown.  Pheasant and mule deer move in to feed, and snow caps the mountains way in the distance.

Seeing a brown trout come up and smack a grasshopper is dramatic, no doubt. But even a two-footer pales in comparison to the sheer beauty of a float down a big river in the fall.

Bring on Fall… and the Pike Fishing!

Andy Whitcomb 9/13/2011 As my family continues the quest for the perfect boat, we have reflected on some fun boating memories. I have been on the water in an assortment of vessels and, as strange as it may sound, a significant part of my boating […]

Back a trailer down a ramp like a pro

For whatever reason, some things in life just don’t come easy. Patting your head and rubbing your belly is one. Learning to tie your shoe laces is another. Driving on ice is a third. Add backing a trailer down a ramp to the list. 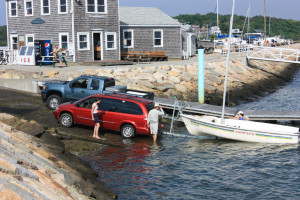 For whatever reason, most boaters have a tough time backing down a ramp. Maybe it is the backwards view of the world that comes from looking in a rearview mirror. Maybe it is because many boaters who tie up to slips or mooring balls only use their trailer twice a year, once to put the boat in the water and once to haul it out of the water.

Backing a boat down a ramp shouldn’t cause panic and frustration, so correct a few common mistakes and focus your attention on getting out of the harbor. 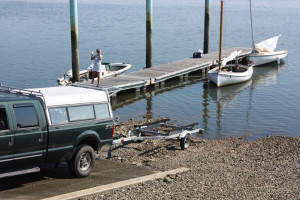 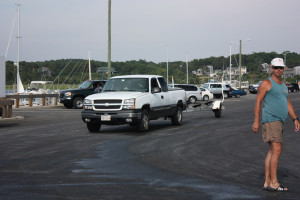 A little practice goes a long way. Now that Labor Day is past and the boating traffic is light, why not make a few runs to iron out the bugs? And as we remind our kids, practice makes perfect.

Safe Boating: When the Water Gets Rough

Kirk Deeter 9/7/2011 I just returned from a remarkable pike fishing adventure on Lake Athabasca in northern Saskatchewan. If your dream fishing trip involves big (I mean 40 inches or longer) northern pike, this is a great place to consider. Being so far north (above […]